Today I bring to you an idea for a proposal in hopes that we can collaborate on improving it together where needed allowing us to eventually come up with something we would like to implement as a community. I’m curious to hear your thoughts on what I wish to propose.

The Grape DAO currently has a large sum of USDC ($420K+) being held idle as treasury funds. I would like to propose that the Grape DAO allocate a portion of the idle USDC from its treasury to purchase LFNTY/xLFNTY tokens (whichever of the two are cheapest at the time of purchase).

These tokens would then be converted to veLFNTY and held by the Grape DAO wallet at a 4y lock up. Grape DAO would hold veLFNTY tokens as an asset in the DAO’s treasury.

Lifinity is a proactive market maker designed to improve capital efficiency and reduce impermanent loss (IL). It is able to accomplish these goals by:

Lifinity is the most capital efficient DEX on Solana (as measured by volume / TVL). Since its launch in January, Lifinity has performed over $1B in trading volume with only $5M in available liquidity.

For a deeper dive on Lifinity, please check out these resources:

Lifinity DEX protocol is governed by 3 tokens. Protocol participants can purchase both LFNTY or xLFNTY and either lock or convert these tokens to veLFNTY as desired.

As a veLFNTY holder Grape DAO would be entitled to a share of the veLFNTY rewards generated each month and distributed to veLFNTY holders.

One of the major things that sets Lifinity aside from other platforms is that unlike other DEX platforms, the Lifinity DEX owns the liquidity that is provided by the protocol to traders seeking to swap between token pairings. 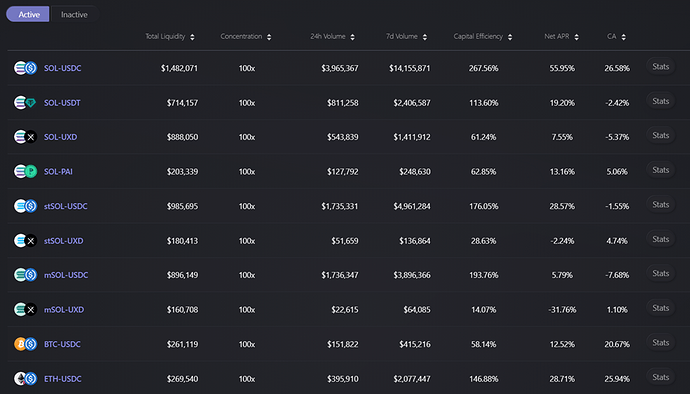 This means the protocol collects all trading fees and profits generated from market making using these funds. Since Lifinity provides protocol owned liquidity to (most of) its pools it also doesn’t have to pay temporary LPs to provide these pools with funds which happens to be the case in many other DEX projects. As such, the LFNTY token is not needed to promote any liquidity mining schemes meaning token holders are not being constantly diluted by new LFNTY token emissions. In practice this should have a deflationary effect on the token price.

Since Lifinity chooses to instead pay itself, the protocol is able to generate substantial revenues. 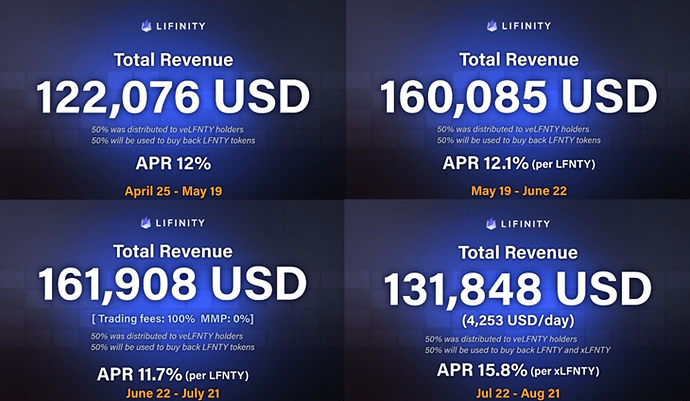 As you can see, Lifinity is having tremendous success generating profits even during some of the harshest market conditions crypto has ever seen. Bear market conditions like the ones we’ve been privy to for the past 3–5 months are a perfect opportunity for the team to continue battle testing the protocol.

If you take a look at the Lifinity Dashboard (https://stats.lifinity.io/) you can also see that a large percentage of tokens have already been locked as veLFNTY for 3+ years. For these reasons Grape DAO should feel comfortable holding veLFNTY rather than other Solana ecosystem tokens which are more prone to token dilution via the methods mentioned above. 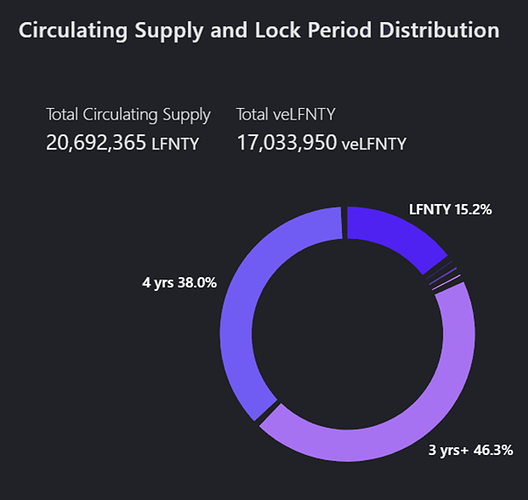 · Allow the Grape DAO to participate in, and directly benefit from, the success of the Lifinity DEX and the LFNTY token.

· Provide a reliable, scalable, source of revenue for the Grape DAO treasury via veLFNTY rewards.

· Further expand the symbiotic relationship that exists between Grape DAO and the Solana ecosystem more broadly.

· Put a portion of the idle USDC treasury funds to productive use for the Grape DAO.

· Which period of time should the buying be spread over

For the sake of simplicity, I’ve tried to keep the variables in this proposal to a minimum as I figured we’d likely have a much more thorough discussion that would require me to rework/rewrite parts of the proposal as we decide on things as a community.

My suggestion would be to allocate anywhere from $25k-$50k of the current undeployed USDC towards this endeavor. Given the lack of liquidity mining for LFNTY, there are very few sources from which the LFNTY/xLFNTY token can be bought. This allows for much better price stability of LFNTY compared to the average crypto token which is usually very volatile. A lot of this relies on the fact that many of the LFNTY tokens have already been converted to veLFNTY and locked for 3+ years.

My initial thoughts would be to spend $25k-50k USDC over 1 month. I’m not sure if there is a reason that we’d want to extend the purchase period too far into the future given the constant demand for the token.

Once again, the initial proposal that I have drafted and submitted to you here today should be seen as a starting point to base discussions around. Any of the numbers or ideas that I’ve used are merely suggestions and will need to be discussed further by the community and tentatively agreed upon before moving forward. I hope that the prospect of further intertwining the Grape DAO with the Lifinity DEX excites each and every one of you as it much as it does me.

Looking forward to hearing your feedback!

Since we are a social community, I would like to deploy our treasury towards acquisition/stake in products that allow GRAPE members to actively contribute in using/improving the products that we invest in.
The proposal currently only addresses the returns and portfolio diversification aspect of the investment. I would like to learn more about how our community members can participate/benefit from this purchase in terms of individual participation and or collective governance.

If a member/participant believes that there is social benefit to this investment, but the work needed to establish the same is significant, I would be happy to create a bounty to explore it. I am already sold on the points on which the OP has argued and would be very disappointed, if we did not explore its complete potential in terms of its impact to GRAPE members.

This is indeed a very interesting proposal and very attractive, thank you for such a professional analysis, let me understand the lifinity project.
To achieve the investment goals in the proposal, there are two conditions. 1. What will the cryptocurrency market look like in the next few years? Everyone knows that the global economy is facing a major crisis. Maybe we will face the biggest economic crisis in human history. Whether the cryptocurrency cycle will still follow the previous law of development requires professionals in our community to make an assessment of the future development of cryptocurrency. If the situation continues to deteriorate, perhaps it may be safer to hold usdc and take short-term arbitrage. 2. As far as my cognitive ability is concerned, I think the project investment you mentioned is a good choice, but more in-depth project analysis is needed to convince other DAO members.
But no matter what, I like this proposal, thank you very much for your contribution.

20% in the last 30 days. Shouldn’t we wait for the liquidity on Solana DEX’s to stabilize first?

How would we go about buying Lifinity and locking Vlifinity as a DAO, it seems like a currently a centralized process would be needed to perform these swaps. As @Whale_s_Friend correctly stated it would be preferred if there was a possibility to perform these steps directly on Realms in a single proposal.

Re: Your questions Billy

20% drop over 30 days certainly is volatile, but that’s less volatile than Solana has been over the same period. In the last 30 days LFNTY has had a high/low difference of 18% while Solana’s high/low price differnce of 37%, in the last week Solana has seen a much better recovery. (I highlight Sol as Lifinity’s LP pools are by in large SOL/Wrapped SOL - stable pairs, so revenues may be somewhat correlated ) 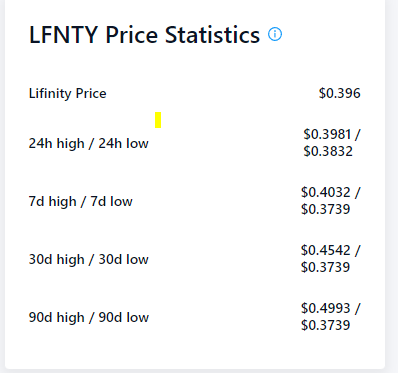 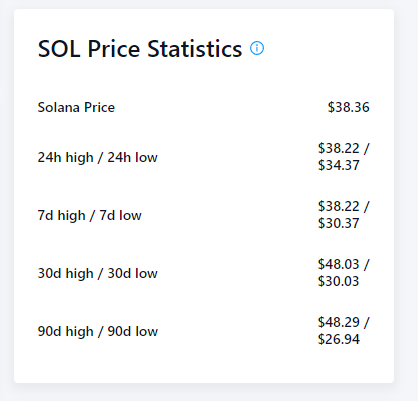 On the execution side certaintly true no direct realms instruction option. Could follow the 10k NFT Sweep’s proposed execution through transfer of funds to the Grape escrow wallet. The management of this investment could be seen as a more pertinent question to address, one thing is that it would be more liquid than NFT’s given 4-year locked VeLFNTY can be tokenised to xLFNTY and sold. Probably best practice to decide a stop-loss and/or take profit in advance should we wish to proceed with such an investment.

Personally I’d be infavour of investing in LFNTY but at a lower amount. Would suggest 5k USD instead of the 25k proposed.

Very good analysis @TheRipTyde thank you for taking the time to answer my questions. I also agree that if this proposal was pushed forward we could start out with a much lower entry point of $5k as you suggest, and we would could revisit in 90 days again based on the past performance on a potential next entry point.

This topic was automatically closed 30 days after the last reply. New replies are no longer allowed.