GRAPE Membership - Simplification of the DAOication

I’d imagine Gibbon’s and Great Apes who care to check ultimately will feel very hard done once they discover the rules changed, and they were misold on what they were getting.

At the same time these are the least active membership tiers and are adding the least value to Grape, also truth be told i think many of the benefits that were being offered to these membership classes are also no longer there which is a good reason to retire them.

With the last DAO call there was talk of establishing a feeder DAO for onboarding new members, while i don’t know the details of whats planned for that DAO, I think it would be good form to invite Gibbons/ Great Apes to that discord if there still keen to be a part of Grape, we could snapshot the current members of those tiers and have an open offer for them to get back in at a later date.

To me we established clear amounts of Grape to be held to qualify for each of these memberships, with the proviso that once someone had that membership level they would keep them. Changing them doesn’t seem great to me

The two main cases I’ve heard for raising the threshols seems to be:

With the case that Grapes providing a lot more value/ benefits to members now then it had which I thinks hard to gauge with many benifits to Grape memerbership being intangible, and while some tangible benefits are available atm Solana Phones for Neanderthals, Ability to request tickets to Solana Hackerhouses for DAO members, I’d note many benefits to holding have also disappeared. 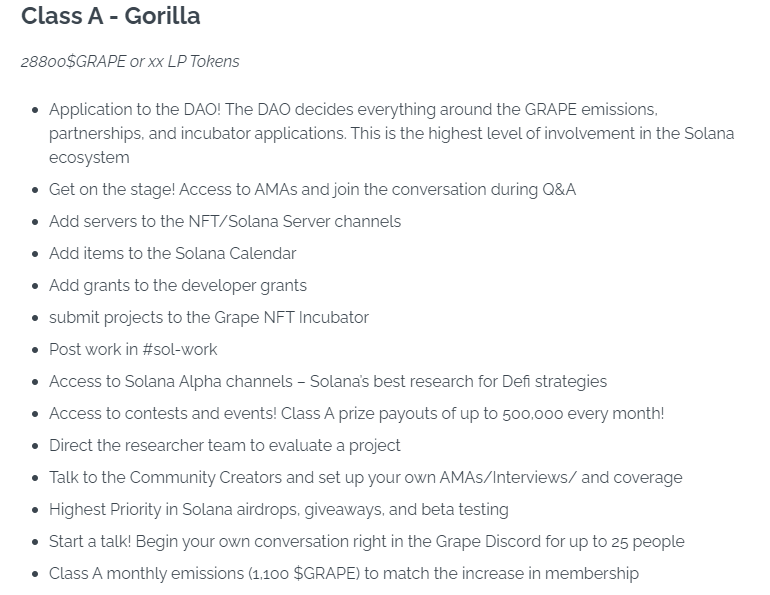 With the membership being undervalued, people can now purchase membership much cheaper than those who joined 2021/ early 2022 that’s a fact. To me Increasing the membership threshold doesn’t do anything to address the tokens inflation and i can see it becoming a repeat cycle.

I think minimum entry level to an NFT community is one NFT, and that doesn’t change if the floor tanks.
I’ll give UniqueVCs as an example, except that in their case they added layers upon layers of tiers that require a holding combination of tokens and NFTs.

What I’m concerned about is whether this change is going to be sth we consider every now and then with significant change in market price of tokens. What happens when $GRAPE pumps 10x or 100x, are we gonna be pushing for the reverse?

Also I’m sure we are not the only DAO affected by inflation. Maybe we can gain some insights by looking into the membership structure of DAOs like mango, so adjusting our membership doesn’t become a reoccurring theme whereby it becomes difficult to get a significant majority on the same page.

I’m in support of this model. Kudos to whoever put up this proposal (with dynite of course). I’ve been thinking about an on chain reward emission model and now it’ll incentivize governance decision making. It’s 10x better than class emissions which has zero or no utility compared to the above. Super excited for the next step grape is seeking to take with this model

As someone who is relatively new to Grape, I don’t have a strong opinion of how much GRAPE one needs to hold in order to access membership tiers.

However, I do think that it’s worth considering a compatible model based on quests. This can maybe even kill 3 birds with one stone: 1) membership, 2) onboarding and 3) reputation.

Many DAOs on EVM chains and even Cosmos use a concept of quests. A quest is basically a series of steps someone can take to get acclimated with a dapp or DAO. For reference, check out Gitcoin Quests here: Build and Fund the Open Web Together | Gitcoin

In order to separate serious member candidates from others, Grape could design its onboarding sequence in such a way. We could imagine making the low hanging fruit such as buying Grape, staking on Realms, voting, etc. a path that leads to the Great Ape tier, while maybe posting on Discourse, creating a proposal or completing a bounty would offer access to the Neanderthal tier.

One could combine this with holding a certain amount of Grape or reputation tokens or anything else.

. And clearly this is more complex to design so would take more time, but the impact on membership quality might be significant.

I believe I will be moving forward with getting rid of all class differentiators.
No more A, B, or C.