GRAPE Membership - Simplification of the DAOication

(Idea: holding GRAPE, name is still purple, but no longer having A, B, or C)

The plan is to move forth and execute this as an on-chain proposal if no feedback or counter proposal is put forth. If it fails, so be it. But I think it’s time we do something about the membership. Ideally, after the initial framework is made, we would expand this model over time gradually in order to fall in line with the long-term objectives of GRAPE (staking, nfts, price adjustments) and the betterment of the community.

Would like to read some more details on your thought process in choosing the numbers above.

In this proposal the emissions are actually increasing and reducing the members who qualify. In July the total membership emissions on realms was 310,930 GRAPE

The bluff was called.
!pray

Love the initiative on this and totally up for reducing the classes to 2.

Can’t really argue against moving away the inflationary membership. Perhaps @BillysDiscord can provide any arguments why this might break anything?

What exactly are onchain emissions?

What happens to all the current gibbons & great apes? Do they get airdropped the difference towards the new Great Ape and let the chips fall where they may (they’ll still need to deposit in realms to keep the role, right? Right?

On-chain emissions is my way of saying rewarding grape for voting.

I say let the dominos fall where they may.
However, we can have a short term have a “Tell us why you’re GRAPE” channel
Then on a case by case basis we can reward those individuals with the needed GRAPE.
This would also let us know who is actually interested in staying in the community.

They will 100% still need to deposit to realms.

So basically remove the class emissions people get for depositing and replace it with emissions based on voting activity?

Yeah, but there is an avenue where we keep the current class emissions (deposited on realms) but also incentivize the voting instead of replacing.

I would go for this for sure, battling inactive voters is a must do since we are limiting the quorum based on how many depositors, might be wrong.

Also, why get rid of the smaller tiers? Do you think the Gibbons and Apes will upgrade their membership to Great Ape or will they instead dump their $GRAPE? I’m worried that getting rid of their membership tier might be sending the wrong message at this time.

I originally joined the Great Ape membership tier to access the alpha channels and to get more emissions for $GRAPE, as well as giving me the ability to apply for the DAO. Now with the alpha channels gone, and now potentially removing emissions, I just hope that Grape can successfully create a new vision that will re-invigorate the community.

Fair point. Nothing is set in stone, merely introducing an idea. Maybe a balance is best, or just to leave it. Happy to hear peoples thoughts on the matter so far in this thread.

Simplicity is reason for reducing the tiers. The cost is copmaritately not that much, plus there certainly many avenues to earn GRAPE as well.
As mentioned by Taki earlier on what would happen to them, perhaps we can host an event so that members who are still interested in maintaining such a role can still do so.
Like the “Why are you an OG” even hosted many months ago.

Would like to hear your opinion on a new vision. This would be super helpful considering you came in at the smaller tiers

I don’t feel like I’m in a position to offer a new vision as I’m not up to date on everything the greater DAO is doing, or what has been discussed. What I can tell you is that from my perspective I do miss the alpha channels, especially hearing from the researchers talking about the space. And I liked the idea of earning emissions by attaining certain tiers of membership. The alpha channels are now gone, and now there is a proposal to remove the emissions.

My question is, if you remove the emissions, then what is the new vision for Gibbons/Ape’s to upgrade their membership level? My previous point remains that if you tie emissions to voting then you are incentivizing potentially uninformed voting. I’d personally like to see the emissions remain the same, and giving bonuses on voting. It still doesn’t solve the issue of potentially incentivizing uninformed voting but at least it’s not forced (at the risk of losing emissions completely).

The brutal truth is anyone who bought into the membership tiers in 2021 like myself are down bad. What costs thousands to attain now only costs less than $300 (Great Ape). Asking a portion of your membership to upgrade or lose their status when they are down so bad might not go over that well. I just hope that the incentives to upgrade will be there.

Concerning the uninformed voting, we could introduce the option “abstain” into votes so people who are not sure can still be counted as voters.

Once upon a time it did provide value to me. Not sure what happened to the research team, but yes the engagement dried up.

I think up to January/Feb the Researchers were more active/engaged, there were a couple of main brains leading it, one who was gaming the emissions system and the other who felt they should be getting greater compensation, they both effectively left at the same time and a couple of others disappeared into the ether at the same time.

Then skill force emissions across the board were effectively on hiatus for 3-4 months so only one or two kept up doing more than reposting tweets.

Thank you for the insights.

On the class emissions side, I think we can move forward with introducing the “abstain” option and linking it to voting participation. The skill force is another topic.

Researchers were fun but after the rewards stopped they either got salty or just moved on. We never found a great way to monetize that action and moving to a separate subDAO was not endorsed!

Big thank you for this, i think its really needed!

I like where this is going! I believe we should go with even higher values. I like the symmetry you are going for so let’s make it rounder and get Neanderthal to 333,333 $GRAPE! (not change the proposal number)

With 3,000 Neanderthals we have the whole supply locked up in membership!!!

And on the gamification of our discord roles experience, I would love to have some secret roles.
Special roles for 1m grape and 10m. Later on, as we get more stuff onchain we can play with the add more cosmetics.

On the last part.

a. grant a maximum reward of 69,000 $GRAPE per proposal (typically ~10 proposals)
Going back to limits, i dont disagree perse but its not imaginative

b. Failed proposals would yield a 25% reward instead of a full 100%
On this one i strongly object, only successful, non reoccurring proposals should award voting power.

Looking forward to the DAO call

Based off of the conversation on Sunday

-Personally, I think we are at the point where we provide huge value for all members. Raising the great ape/gorilla amount to 30,000 would be my vote. This is a defining moment where we will see some members drop off while others will be more active than ever, and I think that is a good thing

Also some food for thought 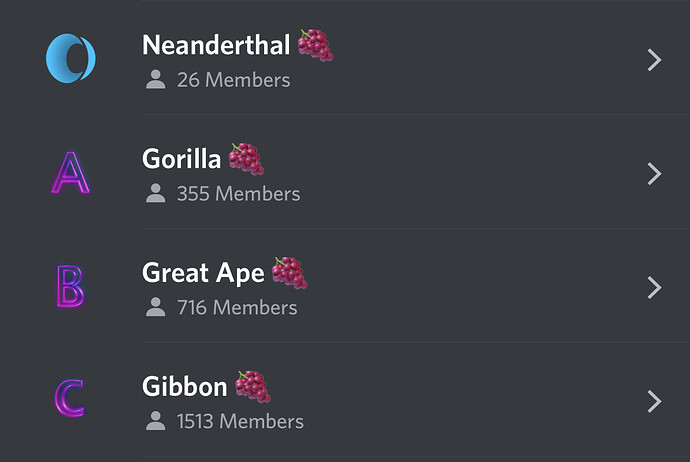