This epoch marked the first on the unification of Team Videographer, Team Designer, Team CC, and our YT guy.

4. NFT Council and DAO Board

Do we still have Panda/Garuda grants?

Contests, rewards for events for the whole month

Pandas Growth Grant to promote the growth of the Chinese part of the server. Encourage the creation of the Panda SubDAO and promote inclusivity by organizing events, translations, tutorials, Chinese Social Media Presence, etc.

are we terminating the crew role?

I agree to the above specially the tiered aspect, that’s a great point ! it enforces engagement and motivates more participation.

This morning Dean posted that there were 6 in the NFT Council, there seems to be 5 listed here.

Just a note to ourselves @DyNite dynite and for anybody wondering: Membership Emissions will now be different and adjusted to the inflation schedule as seen in our documentation: Get involved - and benefit! - Grape Network

I know we had a decreased amount of earning for the Community Creators, dropped nearly 20% for our top earners - this month we will also have a huge addition with Creative subDAO joining the CCs - need to probably work out where those subDAOs joining funds and stuff breaks down into it all at a more individual level - one of the things we need to make sure is the individual tier 3 CCs arent getting horribly small amounts

Aye, I combined the budgets for those who joined CC.
My strong recommendation is that you guys would increase your tiers to 4-5 different tiers since it would probably be easier to fit different people into those tiers rather than the 3 your currently have.

Since the creatives has merged with the CC, shouldn’t the existing Creatives allocation be added to pre existing CC allocation?
Plus I think Dynite has a great point, we should also increase the CC tier to 5 tiers

For starters we need to know what the crew stands for, what they offer, what role they play… all these should be accessed before terminating any emissions… if they play no role then they shouldn’t earn.

There are currently 7 members including Dean

Crew role is for people that need to make channels and permissions changes. When we had the emissions cap, we made life easy and just gave Crew role to people that were clearly doing alot of work on Grape. Now that we have removed the cap and developed the tiers in other subDAOs, I propose we stop the emission to the Crew role. 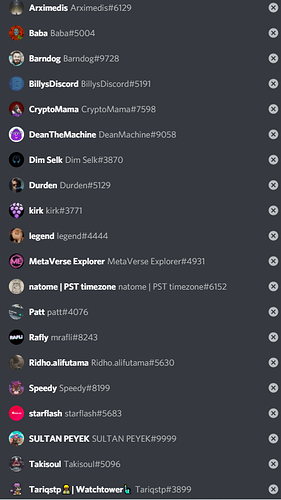 After the DAO structure and the council, the crew team role isnt implemeting value anymore to GRAPE, agree on removing the emissions, can keep the vanity role.

Yes, I know that Starflash had suggested a lower tier, worth mentioning in our next subDAO

Agree with this, most of the usage for Crew role is overall permission through Discord without the need to contact a team member.

So removing the emission should suffice and focusing more on specific work roles should be more obvious.

I really hope the organizer emissions is re-examined, although it’s has already been stated to the Dao, I’m just dropping this here for documentation purposes.

Noted. Thank you. Please do share with Dynite or myself a revised version of your tiers and proposed amounts when ready.

Going to be receiving information today and tomorrow. Will push Jan Emission v1 out as soon as I receive that info, likely 24 hours from now.