Proposal:
To launch a Grape NFT that takes on the role of membership and governance.

Overview:
Recently token emissions, token price and membership structure have all come under scrutiny with several proposals currently being discussed on how to address these issues.

The proposal here is to launch a Grape NFT collection, dubbed ‘Grape Apes’, that would become the proof of membership, that would have a cost in Grape to mint and need to be staked to earn Grape emissions and receive weighted governance voting.

Further Context:
$Grape emissions have been given out to the community for events and skill role emissions as a reward for participating in the community to enable members to have greater share and weight of votes in the running of the community. However in return many of the members have undervalued the token for its intended governance role instead seeing the tokens monetary reward value and in turn have been cashing out and lowering the Grape token’s value in the process. Much discussion has been given to rewards/emission being too generous and thus are being reined in to reduce the token outflow in the hope that membership additions, upgrades and more generally the grape held by community members will outways the sell-off of Grape, with other incentives such as protocol bonded grape liquidity and mango lockups having been launched or in the works to again counter outflow and/or reward holders of Grape more.

Membership Tiers seem a key driver for the purchase and holding of Grape, and while we’re seeing net growth in membership numbers there are still those who move on from the community and choose to sell off their holdings. It’s also been noted that members don’t have the same incentive to hold Grape over and above the membership tiers when it comes to membership emissions and token inflation.

With this in mind I’ve come to the NFT proposal. If you would like to be a Grape member you exchange $Grape tokens for Grape NFTs. With this I can see two options: either the Grape used to mint is burned; or the Grape used in minting be returned to the Grape community treasury. I’d be in favor of the latter, but in either case the circulating token supply should decrease over time providing greater upward pressure on the token.

What this could also achieve is an ability to readily scale membership through minting additional NFT’s, with each membership NFT intern earning more staked emissions.

A base case for this proposal could be a single design and single type of NFT, however a random generative collection would give each NFT its own quirk and personality that members could associate more with, and more strongly assocaite with than say X amount of tokens.

Additionally further development of this proposal would be to have the tiered membership classes distinctly mintable and ideally combinable in that you can mint a Gibbon for 1245 Grape (or the future proportional value), a Great Ape for 6,200 grape and have the ability to make a Great Ape through combining, i.e. burning 5 Gibbon NFT’s. Having distinct art for membership tiers clearly displays the exclusivity and status of each and gives the additional benefit of being a badge of honor a PfP that can be displayed internally and externally across the Solana ecosystem advertising grape more, and may more readily allow discord roles to be assigned.

Such a collection of Grape Apes could also be a great way to advertise the Grape Market place by showcasing Grapes own NFT collection for all to see and encourage listing and trading on the Grape Decentralized Marketplace. Although worth noting that having the NFT listed creates an avenue for it to be sold which again then puts a price on the membership and creates a monetary incentive to sell.

I’d note this is by no means the first time a Grape NFT has been proposed and that @Pavelsan and @rustandmoth have both previously put forward NFT proposals
With Pavelsan’s evolving dynamic NFT proposal and Rustandmoths Gameified dynamic community reward Grape nft proposal. 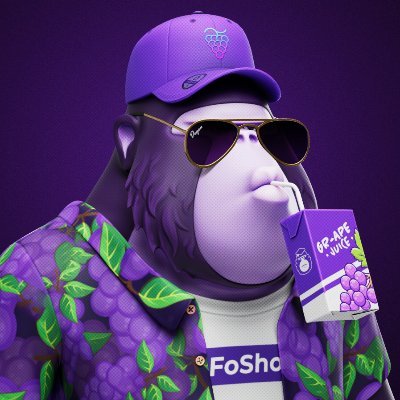 @_Dean_Machine
Likely the DAO will discuss @RipTyde_sol's proposal for a @grapeprotocol NFT today We should also pay close attention to how $SAIL is doing this (props for being the trailblazers here) Other things to consider: voting participation, time holding, skills What else? https://t.co/tpWmdHzFDb

I had to leave the call before it came up, could discuss on Tuesdays call of there’s time then though

It was a great discussion on todays Tuesday DAO call on this.

I think its fair to say there’s a lot of interest in doing a Grape NFT but that this proposal is a bit overly ambitions for a first go at a Grape NFT collection which may raise as many technical challenges as it seeks to solve in membership/ governance and token supply issues.

The more likely follow on from this is an initial Grape NFT, that may act as a simple identifying pfp collection or potentially a gallery collection.

The follow on dicussions have been broken into an Aesthetic design thread and a technical utility thread.

What this could also achieve is an ability to readily scale membership through minting additional NFT’s, with each membership NFT intern earning more staked emissions.

It would be nice if each NFT represents the amount of grape staked/locked when it was issued and can be burnt to receive the exact amount of grape locked back. Just that in the case of grape the redemption or claiming process will last over a vesting period. The NFT is transferable and all, but if burnt elsewhere other than the staking contract, the locked grape is irrecoverable forever. More grape can be staked, although in this case maybe the old NFT is burnt in the process and a new one is issued (I don’t know how this works in whirlpools because I haven’t tried staking more).
In terms of implementation I don’t know how easy it’s gonna be for grape, but this is not entirely a foreign concept, proof of concept can be seen with Orca whirlpools.

Pros:
-There’s no limit to the amount of NFT issued as long as there’s grape to stake
-This hinders future dilemmas we might face in terms of monetary value of the NFTs and what not if the NFTs are tradable because they might become overvalued (or undervalued). In this case, selling the NFTs might mean trading off your membership one way or the other.

Cons:
-This might be hard for grape to implement (since we aren’t Orca) and building it to work might take time or hinder progress especially if the mechanism isn’t open-sourced by Orca.
-This in some way might go against progress made thus far around this topic (e.g. using it as pfp, generative art,…) but I’m still putting it out in case it might be an option no one has thought of.
I intended to suggest this on the day this proposal was made but got caught up with other engagements.

Great idea RipTyde! Love it. I would also be in favour of having the $GRAPE token used to purchase these NFTs be burned. Big fan of ecosystems with good tokenomics, and increasing token sinks are key to maintaining a vibrant ecosystem.

Hey all, I’ve put together a document that pulls together the main ideas suggested for a Grape NFT here:

Grape NFT Ideas Summary Between the NFT Design thread and NFT Utility thread, several ideas for a proposed NFT collection have been put forth which I've broken down into constituent parts of Collection ideas, Design ideas, Artists, Utility ideas and...

There’s a lot of suggestion with pro’s, con’s against them and some examples of projects that have interesting utility we could draw from.

Additionally there is a Grape NFT discord thread that has been opened for NFT Council, DAO Board, Developers, and Content Creators to futher the discussion. CC in particular have put together an amazing timeline which I’m sure will get shared along with their design proposal.

keen as for this, i think its a much better way to go in terms of membership specially with the current climate in crypto